Recapitulating the Multifaceted Inflammatory Environment of the Intestine In Vitro

Intestinal inflammatory diseases are highly complex, which has thus far prevented development of an effective in vitro disease model. With access to a donor-derived cell biobank and the ability to recapitulate region-specific environments of the intestine, Altis Biosystems is working toward the development of an in vitro RepliGut® model to accurately recapitulate the complex intestinal inflammatory microenvironments. 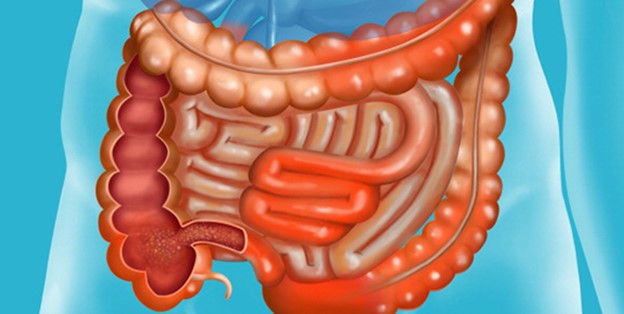 Inflammation is a key factor in many intestinal diseases, including cancer, celiac disease, cystic fibrosis, irritable bowel disease (IBS), and inflammatory bowel disease (IBD). A major clinical and research focus is IBD, which is a broad term encompassing ulcerative colitis (UC) and Crohn’s disease (CD), as it effects a significant portion of the population, yet few treatments have been discovered. The etiology of UC and CD are unknown, but major factors, including genetics, diet, microbiome, and environment, have all been implicated. In IBD, periods of remission do occur, during which time inflammation is minimized and the epithelial layer can heal itself; however, the causes of remission and subsequent return of inflammation are not well understood, making treatment very challenging. In the worst cases, part or all of the colon and even the rectum may be removed to control disease progression.

Interestingly, UC and CD present differently in patients, with UC always originating at the rectum and causing continuous mucosal inflammation, whereas CD can originate anywhere in the intestine and causes patchy, irregular areas of transmural inflammation. Differences in intestinal physiology may cause differences between UC and CD, as the different regions within the small intestine and colon, as well as differences in the two tissues themselves, are vast. The small intestine is divided into three segments –– the duodenum, jejunum, and ileum –– all with different anatomical features, but the same overall goal to absorb nutrients in the body. The last region, the ileum, has characteristics of both the small intestine and colon, absorbing luminal contents but also containing bacteria, which makes it of particular interest that it is often involved in patients who have CD. The length of the colon tissue is divided into three segments, termed the ascending, transverse, and descending colon in relation to anatomical orientation, which all contain microbiota, albeit at different ratios along the tissue axis. These regional differences are reflected in the different natures of UC and CD and lead to many questions, including: “Why does UC develop in the distal colon and rarely affect the ascending colon?” “What causes UC to progress in a continuous manner, while Crohn’s involves spotty areas of inflammation and affect the ileum?” and “What causes IBD to develop in the first place?”

The obvious approach to study intestinal inflammation is to make an animal model; however, to generate animal models of intestinal diseases involving inflammation, it is first necessary to induce damage in a manner similar to disease initiation. Since the etiology of IBD is unknown, this is challenging to recreate in an animal model. The most common method of inducing inflammation in animal models involves the oral or rectal administration of an inflammation-inducing chemical, such as dextran sodium sulphate (DSS) in drinking water. The resulting damage causes whole intestinal inflammation, affecting the epithelium, underlying mucosa, and luminal microbiota. Genetic mouse models have also been developed that lack key inflammatory receptors, resulting in mice with intestinal inflammation. However, these models are not generally translatable to humans because of diet, anatomical differences, and differences in receptor expression. Mice also tend to result in very reproducible responses, thus not recapitulating the diversity in disease across the human patient population. Importantly, there are also no developed mouse models that exhibit inflammation as is seen in humans, with regional specificity of origin (as is found in UC) or pattern (as is found in CD). Additionally, mouse models of small intestinal inflammation and novel ileal involvement in CD are not available.

To use a human-derived cell type to try to model inflammation, the current industry standard for intestinal research is the immortalized Caco-2 cell line, derived from a human colon tumor. Caco-2 cells have historically not been reproducible across research labs, generally represent a single differentiated intestinal absorptive cell, and are derived from a non-healthy, colonic cell type. Caco-2 cells do not accurately reflect the physiology of small intestinal epithelial cells, as they do not express the same receptors and transporters, which may be important in modeling small intestinal inflammation. These problems with Caco-2 cells led researchers to look for a more physiologically relevant cell type to better represent the tissue they are interested in studying. Primary cells pose a challenge, as they can be difficult to source and cannot be propagated indefinitely; however, they more accurately reflect the behavior of intestinal epithelial cells in vivo. Altis Biosystems, Inc. has developed methods to isolate and expand intestinal epithelial stem cells, allowing researchers to adopt newer and more physiologically relevant in vitro models based on human donor–derived primary tissues.

Altis Biosystems is currently developing a unique biobank of healthy whole intestines from a range of donors of different sexes and ages with no history of intestinal diseases. From each donor, intestinal epithelial stem cells are isolated from each region of the small intestine and colon (duodenum, jejunum, ileum, ascending colon, transverse colon, and descending colon) for use on our RepliGut® in vitro platform. Our RepliGut® platform has a epithelial cell monolayer that generates a functional, impermeable barrier on a Transwell insert. This single-cell-type model allows for investigation into the physiology of intestinal epithelial cells as proliferative stem or differentiated cell types, depending on the researchers’ interest. With our biobank containing cells isolated from individual regions from each donor, researchers can investigate each region for its independent biologic responses. We bank hundreds of vials of intestinal epithelial stem cells from each donor and our cell expansion techniques allow for us to store them at low passage numbers to prevent karyotypic abnormalities, leading to a biobank suitable for long-term studies.

As expected, cells isolated from donors behave slightly differently; however, similar trends are observed among all. We see that our intestinal epithelial cells expand in culture, form confluent monolayers, differentiate into the post-mitotic lineages found in vivo, and functionally respond to the inflammatory cytokine TNF-α. We also observe regional differences, with specific culture conditions necessary to successfully grow each intestinal region, highlighting the biologic differences of each region and reinforcing the need to look at each region individually.

Although this donor-to-donor diversity may be initially thought of as hinderance to using primary cells, it actually provides the unique opportunity to utilize a model that represents the diversity of the human population. Given that genetics, age, and diet are considered important factors in the development of IBD and other inflammatory diseases, being able to create models for use in drug development that represent people from different sexes, ethnicities, and geographies afford more comprehensive testing capabilities. Even subtle differences within similar donor demographics, such as diet, weight, and body mass index (BMI), which can affect insulin levels, may have an impact on inflammation and disease.

There are currently no in vitro models that completely model inflammatory diseases of the intestine. Research has discovered that many cytokines and niche factors play a role in the initiation, progression, and remission of inflammation; however, developing an unbiased model that accurately recapitulates the in vivo inflammatory environment is a challenge. Since the etiologies of many inflammatory diseases, including IBD, are unknown; adding the relevant damage-causing agents to an in vitro model system poses a problem to model accurate disease pathology.

Using Altis’ RepliGut® Planar model, we can recapitulate key factors of inflammation with the addition of inflammation-inducing reagents, including cytokines like TNF-α and IFNγ, immune cells like T cells, and bacteria and bacterial supernatants/products. These additions, added to either the apical or basal side of the epithelial monolayer, can stimulate the cells to induce inflammatory responses at the gene and protein levels. Although these individual additions do not fully recapitulate inflammation, this stepwise and methodical approach to recapitulating the inflammatory microenvironments provides valuable information that cannot be obtained with current animal or in vitro Caco-2 cell-based models. The added benefit of utilizing different regions of the intestine also provides a biologically accurate cell response to the inflammatory cues throughout the gut, potentially leading to faster discovery of region-specific responses. Additionally, identifying in vitro responses to inflammatory stimuli by evaluating epithelial-derived secretions, including cytokines and chemokines, can help identify new clinical biomarkers for diagnosis.

Although IBD is a chronic disease, patients can undergo cycles of active disease followed by periods of remission, where inflammation is reduced or no longer present. Understanding what causes these cycles could provide invaluable information for drug development to further promote remission in IBD patients. The RepliGut® model allows for investigation into both the proliferative stem and progenitor cells, as well as the differentiated cells independently, allowing for the investigation of key inflammatory mediators on each cell type. We know that stem and differentiated cells play important, yet different, roles in epithelial function, so being able to explore how each responds individually can provide further insight into epithelial homeostasis.

The obvious next step with our RepliGut® model is to utilize diseased tissue. However, we do not yet know whether the diseased tissue, once removed from its in vivo niche and placed in an artificial in vitro setting, will still maintain a diseased phenotype using current cell culture methodologies.

With our current cell isolation protocols, Altis has the unique opportunity to isolate other cell types that cause chronic inflammation, as we obtain full length, full-thickness intestinal tissue. In addition to isolating intestinal epithelial stem cells from each region of the intestine, we can also isolate other cells that have been implicated in inflammation from an individual donor, including fibroblasts, immune cells, and bacteria. This allows us to generate a complex, donor-specific microenvironment from cells all isolated from the same mucosal niche. We could also select regions of tissue with active disease and regions without, which are present in patients with IBD, to be able to compare differences in cell biology of these pathologically different tissues from the same patient. These more complex models can also help identify new clinical biomarkers for diagnosis and treatment.

One Step at a Time

Inflammatory diseases are historically challenging to model in an unbiased manner, but there is a great need for effective models, because of the increasing number of patients developing intestinal disease with inflammation as a key symptom. We cannot yet model IBD in an unbiased way, which is a significant challenge for in vitro models to be utilized in drug discovery. Our approach at Altis is to start from a simple model to generate a more complex, physiologically accurate model. Our idea to start developing these inflammatory RepliGut® models is to add in known stimulatory niche factors, including cytokines, immune cells, and bacteria. These damage models, along with the healthy RepliGut® models that we already have, could be used to effectively screen drug candidates for their ability to potentiate inflammatory response, as well as determine their impact on healthy cells. We believe these advanced in vitro culture systems will accelerate the development of therapies for patients with inflammatory intestinal diseases.